Everyone Else is a Returnee, actually came to an end. Actually I already wrote the ending waay back, so I felt all the emotions at that time, but adding the side stories recently made my heart feel weird all over again.

This piece started on the 26th of June 2016. Wow, it’s been 9 months already.
All pieces that were with me until now were already quite special, but this piece was even more so. The fact that I can laugh with you readers while writing something that I want to write – I realized once again how happy such a thing is.

I wrote a few side stories since I felt it’s a pity to let IlHan and his family go with just the epilogue, but now I did it, I feel even more pity. But I think I wrote everything that needs to be written. Personally, I’m very satisfied with everything.
Did you have a joyful time with this writing as a reader? Of course, there may be times where I have disappointed you. However, I do wish that you are more happy than disappointed since you are reading this afterword.

My next writing contains more of my preferences and desires in a more shameless way. I am aware that the likes and dislikes may drastically differ, but I will introduce it again for those that ran all the way here, in hopes that you will be able to enjoy it.

‘I Shouldn’t Have Reincarnated’ – It’s a story about two selected heroes, where only one of them was supposed to appear, and their adventures of somehow ending up in the demon king’s castle. Please go look it up right away if you are curious.

PS – Personally, there was something that made me spit my drink out. If you are an EER enthusiast, then you will probably notice so go look for it! 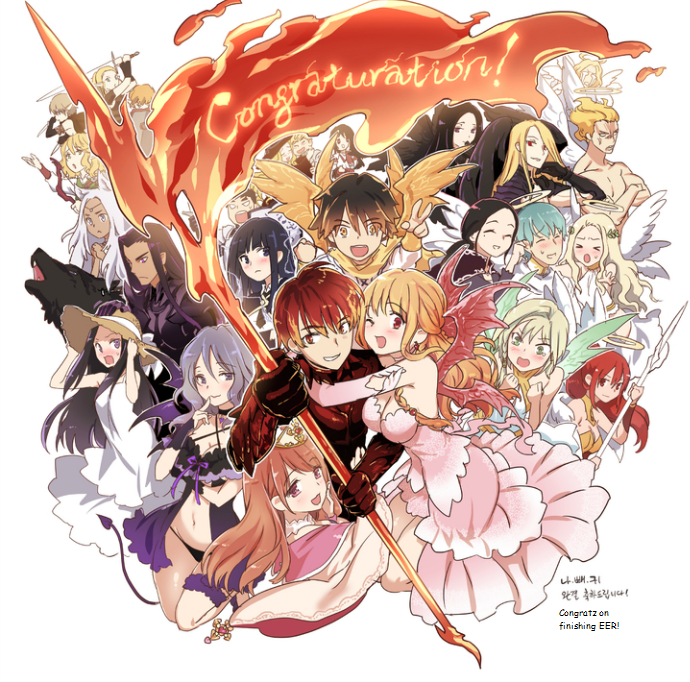 Afterword from translator (this is gonna be long)

TL;DR – Chamber is retiring from translation

Okay, before I start, I’ll get a couple of things out of the way. First, the picture. Yes. the text translation at the bottom right of the picture is INDEED COMIC SANS. I don’t know any other font that fits… I never edited manga after all. Also, Erta’s hair was described as ‘long black’ somewhere early on in the story (I’m guessing the green winged fairy-like girl is Erta cuz she looks obviously tsundere)
Secondly, there are three novels by 토이카/Toika/Toy Car that have NOT been translated. (There’s actually another one but he dropped that one)
Here they are:
Devil King – written before the author wrote the dropped one. I personally think this is meh, since MC has no personality. It’s story about two worlds that get connected to each other, and every human on Earth has a counterpart ‘being’ (humans or monsters) in the other. One day, the two worlds suddenly fuse and MC becomes a goblin.

I shouldn’t have reincarnated – written after he wrote EER. This is actually pretty fun. I won’t spoil, go ask NaughtyOtter/CalifornianOtter from Otterspace/Wuxiaworld to translate it. He seems interested in this one. Finished with 206 chapters. It’s pretty fun though.

Only I can log in – I haven’t read this novel yet since it does not serialize on Munpia but Kakaopage. It’s currently ongoing.

Now onto my real afterword.

At first, I didn’t even know I would take this series, much less finish it. At first, I just had some donation money lying around  (from God of Music I believe), and just clicked on the rank 1 novel on Munpia, which was this. I immediately got hooked, and started translating because it was fun to do as well. But then, Rainbowturtle told me that it was already being translated at NovelsnChill (who seem to be inactive nowadays). Bingryong (translator of the prologue) had already done the prologue before I even started reading the novel! However, I only discovered that when I translated around 12 chapters. So, I just straight up gave them (NNC) my google drive and told them to do whatever with it. Heck, then, JohnSmith (Admin at NNC) approached me and said “Hey, don’t you wanna do it? Come and do it here!” And that was the start of me actually translating EER.

Various things happened mid way throughout translation. First, my grades dropped (Urgh), translating is so fun that I actually became loose with my studies… Second, I got to know a bunch of people and their personalities (AKA admin at NNC and admin at kobatochandaisuki, I’ll keep quiet about their personalities though). Third, Coder Lee YongHo got a takedown notice from the original publisher (such a pity, I want to finish what I started). And fourth, I ended up dropping God of Music. Personally, I really like God of Music, as much as it is painful to translate, though, author’s releases have been becoming quite sporadic as of late. A few people have approached me saying they want to translate God of Music, but I’ve yet to hear news from them. I even gave them full permission to utilize my translations and even get help from me if they wished to. But, oh well. At least I got to focus on EER. God of Music will NOT be resumed (at least not by me).

My future plans? I actually have to serve the Korean military for nearly two years mandatorily, and it’s about time I do it. So, I will not take up any translation work and apply for the military (Although, the competition for the military is so fierce nowadays so I doubt I’d get in soon). So yeah, I’m going to halt translating. I will hang out on the novel community though, so if you want to see me, then come to r/noveltranslations discord server or kobatoland discord server. I’ll also join a bunch of other servers as well like NUF, Wuxiaworld and Volare.

After my military service… I probably still won’t start translating. I actually do need to study (Remember how my grades dropped?), so tough luck.

It’s been a blast reading through all of your comments throughout this series and thanks to all the supporters and readers that have supported me until now.

Ahh how could I forget, give a big round of applause to Koukouseidesu, who has been with me through the majority of this novel with editing. I didn’t actually pay him much too (kobatochandaisuki does not pay editors, so I pay mine). He had a lot of schoolwork to do, but still stuck through with me and the hard schedule of more than two chapters per day on some days, until the very end of this novel. Thanks Koukouseidesu.

Alright, that’s it from me. Perhaps Koukouseidesu wants his own afterword as well.

PS – there’s no event or anything to commemorate the end of the novel.

P.P.S – if you want to donate, please do so here, since I will be closing the support button. shamelessly asking for money.
Oh yeah, remember how I mentioned about the ‘generous people that still want to donate’? Too bad no one did, I guess.

高校生です(Koukouseidesu) here!~
Yea I wanted my own afterword too! :^)

I officially joined KCDS and started proofreading for EER at chapter 83, heck that was a long time ago, we’ve come really far since then! I was motivated to give back to the novel community after having binge read thousands upon thousands of chapters over the past few years.
Well, was it worth it? Of course it was! I had a blast getting to know Chamber-nim (still remember making jokes about him being robot unni, heh) and getting early access to all the chapters that I wanted to read, browsing through them comments (constructive or appreciative, toxic or not, it didn’t matter! I had fun reading through most of them.) and interacting with fans on the discord channel. It was tiring and demanding at times, heck I made quite a lot of mistakes early on (still do, but not as terrible and not as often!) so I’m really glad and appreciate the fact that you guys stuck through with us this year or so 🙂

Similar to Chamber, I’m going to have to go into the singapore army for a period of two years sometime next year, so you guys won’t be seeing me post anything regularly for quite a while! I’ll hang around on the discord channels so feel free to come and chat with me and chamber~

Signing off and behalf of everyone at KCDS, Thank you very much for your support! please continue to browse the site (without ad blockers) and read some of our other novels!
It was a pleasure proofreading for Everyone Else is A Returnee, though you might have found the ending slightly anticlimactic, the afterstories should make up for that.

Currently a senior high school student. From the island republic of Singapore. God damn it exams are hard
View all posts by Koukouseidesu →

94 Replies to “Everyone Else is a Returnee – Afterword”

This site uses Akismet to reduce spam. Learn how your comment data is processed.

Support us on Patreon

Join us on Discord

Do NOT follow this link or you will be banned from the site!